In Briefly Seen: New York Street Life (2015), the last in Stein's trilogy of books about New York, he captures some of the city's most densely populated areas - midtown and downtown Manhattan. Coney Island 40 Years (2011) documents the photographer's ongoing fascination with the eccentric and exuberant aspects of this famous Brooklyn beach community. Harlem Street Portraits (2013) is a series of more formalized environmental portraits of the people who live in this historically significant African American neighborhood. The exhibition will feature 35 prints from Briefly Seen and 15 prints each from Coney Island 40 Years and Harlem Street Portraits.

Additionally, Stein will be conducting a three day workshop at the Leica Store (June 24-26) that will focus on the techniques and insights needed to make meaningful images of people. To sign up for the workshop which is limited to 12 participants, go here.

Harvey Stein describes his work as "my response to the rough, raw, charged and even magical energy of New York City street life. I am attracted to the nuances of behavior and body language in public places, characteristic of the 'walker in the city.'" In viewing Stein's timeless black-and-white images taken between 1974 and 2014, it is clear he is smitten by the vibrancy and diversity of New York street life. He captures the crowds, singling out individuals within it who pique his interest, and the connection between the people, the buildings, and the charged environment that envelops them. With the publication of Briefly Seen, Stein has earned his place in an elite circle of practitioners who have made New York City their studio from the early 20th century through the present day, including Lewis Hine, Alfred Stieglitz, Paul Strand, Charles Sheeler, Harold Feinstein, Gary Winogrand, Lee Friedlander, and Diane Arbus.

Since 1970, when Harvey Stein first turned his eye toward Coney Island, his love affair with this New York beachfront amusement park in Brooklyn began to grow. Coney Island 40 Years tells the tale of his over 40-year romance with this iconic locale. Entering Coney Island through Stein's lens is like stepping into another culture, capturing the lives and times of those who work and play there. There is a sense of adventure, a thrilling escape from daily worries, and much pleasure, whether riding the jarring Cyclone roller coaster, walking the boardwalk, viewing the Mermaid Parade, or sunbathing on the beach. Coney Island, America's first amusement park, is celebrated worldwide. It is a fantasyland of the past with an irrepressible optimism about its future.
The cover image of Stein's Coney Island book is the signature photo for the Brooklyn Museum group exhibit "Coney Island: Visions of an American Dreamland, 1861-2008" that opened last fall.

This volume reveals Stein's reverence and love for the friendliness and warmth of the people of Harlem and the vibrant and bustling vitality of a historic place that has been the center of African American life and culture for over 100 years. Shooting with a wide-angle lens, Harvey's close encounters with families, couples, friends, the elderly, and youth are always honest, direct and involving. As the work spans more than two decades, we are witnessing Harlem during a period of radical transition in style, fashion, and sense of place as new buildings go up, rents skyrocket, upscale restaurants open, and people who have lived there for generations are forced out of their homes. Despite the changes, one gets the sense the people in Stein's photographs are deeply rooted and fiercely proud of their community.

Harvey Stein is a professional photographer, teacher, lecturer, author and curator based in New York City. He currently teaches at the International Center of Photography. Stein is a frequent lecturer on photography both in the United States and abroad. He is the Director of Photography at Umbrella Arts Gallery, located in the East Village of Manhattan. He has also been a member of the faculty of the School of Visual Arts, New School University, Drew University, Rochester Institute of Technology and the University of Bridgeport. Stein's other books are Movimento: Glimpses of Italian Street Life, Gangemi Editore, Rome (2006); Coney Island, W.W. Norton, Inc. (1998); Artists Observed, Harry Abrams, Inc. (1986); andParallels: A Look at Twins, E.P. Dutton (1978). 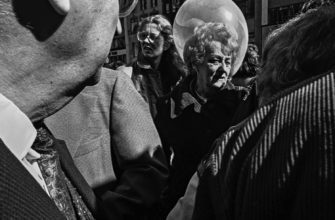